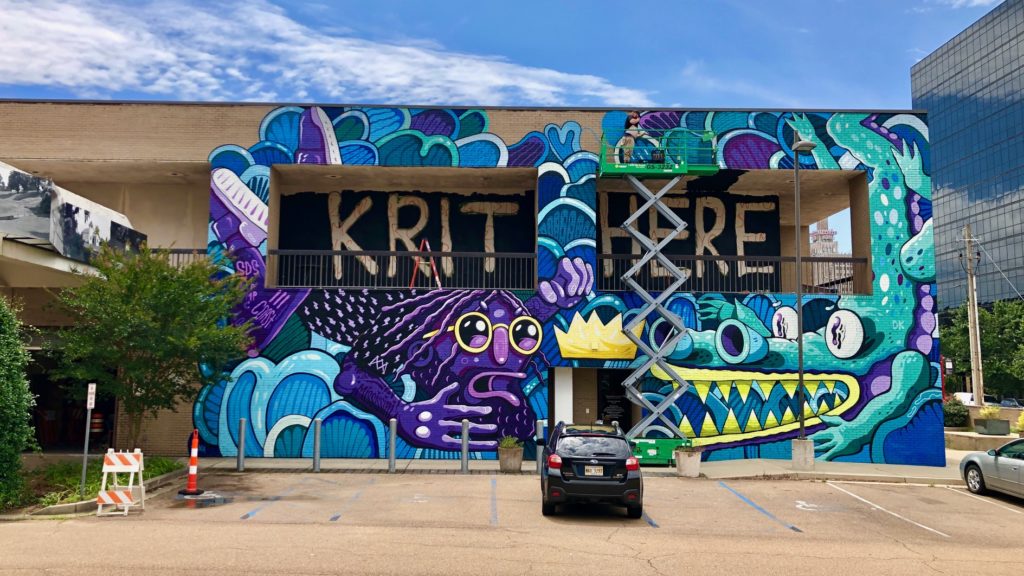 The mural (shown here just prior to completion) was created by artist Birdcap.

The Downtown Jackson art scene is getting bolder and brighter, thanks to a public mural, a collaboration between two Mississippi creatives.

Meridian native Justin Lewis Scott, better known in the hip hop world as Big K.R.I.T., commissioned Mississippi Gulf Coast native Michael Roy, known as Birdcap, for the larger-than-life design on the east side of the Arts Center of Mississippi.

The Jackson mural is part of a nationwide project drumming up excitement for K.R.I.T.’S latest album, “K.R.I.T. is Here” (out July 12), entirely funded by the rapper, assisted by a donation from The Greater Jackson Arts Council for a scissor lift.

“I had journeyed around looking for walls with great visibility,” said City of Jackson Deputy Director of Cultural Services David Lewis. “K.R.I.T. liked it for its size and prominence. We really wanted to bring this space – the Arts Center – to life.”

If the work looks familiar, Birdcap, in a collaboration with artist Ninjacat, has previously left his mark on the other side of the Arts Center in a mural that comes to life at night, commissioned for the Mississippi Light Festival.

“While (the mural) may not be everyone’s form of art, it does represent the fact that we are an emerging and exciting culture in Jackson in regard to arts,” Lewis said. “We want to explore all sorts of spaces and make sure people are continually feeling more welcome and more represented in a broader scope.”

Public art is big: check out Wynwood Walls in Miami.