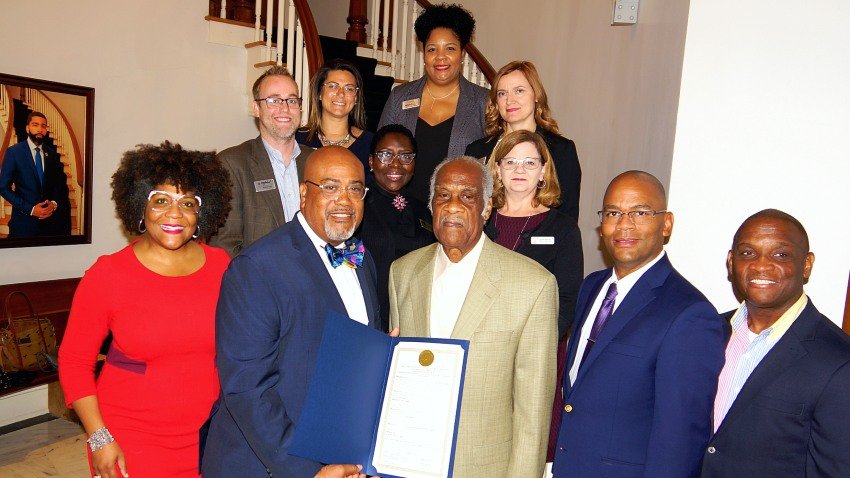 The City of Jackson today recognized Visit Jackson President and CEO Rickey Thigpen for his “leadership excellence” and for recent honors by the Mississippi Tourism Association.

The commendation, brought forth by Councilman Kenneth Stokes (presented by councilman De’Keither Stamps in Stokes’ absence), lauded the efforts of Thigpen and his staff.

“(We recognize) a wonderful young man, but not only that, the body of work that is being produced out of his office as a culmination of a whole group of people,” Stamps said. “We appreciate you, we appreciate your team and we appreciate all the hard work you’re doing.”

Thigpen recognized members of his board of directors, his leadership staff and his father, all in attendance, as he offered appreciative remarks.

“This is much less about Rickey Thigpen and much more about what happens when collective ambition occurs,” Thigpen said. “It’s when the Mayor and city council, city departments and the Hinds County legislative delegation join together and have confidence in what Jackson can become, in what Jackson can transform its city image into – a destination – and that’s what we pledge to do every day.”

“We are honored by the awards we received at the Governor’s conference,” he said, calling it an “amazing feat,” crediting Visit Jackson’s new leadership team. “But we are not satisfied with that. We are going to look for bigger and brighter things.”

“None of that,” Thigpen said, “could have occurred without collective vision.”

“Thank you for all you do for our city,” she said. “I have gotten to work with you in so many great ways and I see a forward-thinking vision in all that you are doing to put Jackson first on the map.”

“Rickey, the secret is out. Everywhere we go, people are raving about you. You are doing an excellent job and I’ll say publicly what I have said to you on a number of occasions now: we are thoroughly impressed with the job you are doing”

“We feel this is a time where all of the institutions and vested parties around the city can come together and make sure we are in one accord and prepared to make certain tourism in Jackson truly thrives,” Lumumba continued.

“Though you are a humble spirit, you need to accept your part and your credit. It has been because you, at the helm, that this has been accomplished and so we’re very proud of you and grateful for your service.”